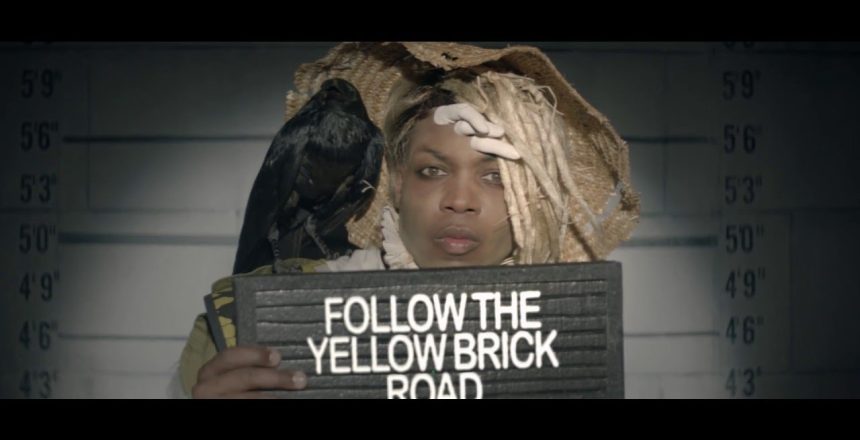 “Please empty your pockets and step through the scanner.” These shocking words at the entrance to the Capitol Theatre in Clearwater, Florida left me dumbfounded. A security check to see a Wizard of Oz show? Yes. Only one week after the Orlando nightclub shootings, “this is the world we live in now,” my partners assured me.

Little did I know, the show we were about to see, Straight Outta Oz, would deal with these very issues head-on. This autobiographical story by Todrick Hall is faithful to our beloved tale of a restless child from middle America, seeking fulfillment in “Oz Angeles,” and learning that peace is actually found in your own heart and home. But with a fierce message, this is no mere re-painting of Baum’s story with ethnic names and tropes. Straight Outta Oz is what The Wiz reached for but never quite achieved, an “urban” spin that takes on uncomfortable modern issues and still connects with the general audience.

From the opening number to the lengthy encore there was powerful social commentary throughout. Every moment was bursting with energy, presence and meaning. Every detail was there for a reason. Hall is known for perfectionism and parodies. Even the costumes were notable for their creative humour. Hall’s plaid schoolboy shirt was tied around his waist in a way that felt completely natural to this environment, but was also utterly evocative of Dorothy’s signature gingham dress. The entire production was crafted with similar nods and winks, in a vision as bold as a Van Gogh starscape.

Hall sets the tone in the opening song “No Place Like Home”, the first of a playlist laden with twists on familiar lines. And somehow each pun manages to be a potent statement instead of a cheap gag. Taking on the role of each major character, Hall tells his own story with voice-overs, as videos above the set carry the story forward – and allow for costume changes. Hall as Scarecrow sings his critique of sexism, racism and Photoshop perfectionism in “I Think That’s Dumb.” Hall of Tin keeps his heart in a glass case for protection against the devious world. “But is a man truly a man, without his heart?” Hall, pimped out in fur coat and chains, calls them the shackles of false bravado and machismo that society demands from men. He laments “I can’t be true to no one else, too busy lyin’ to myself.” This, with ensemble men flanking his full-bodied gyrations, worthy of Magic Mike. Nothing shy or cowardly there. Or is there?

Hall’s critique of Hollywood culture comes out in force when buying some fancy ruby high-tops at Munchscino. “They call it new money but I never knew they threw in complimentary cockiness with the purchase of a shoe.” Later, at the “Ozcars” he is told “to get that green money you walk a green mile and pose for the camera and you wave and you smile.” All the while his mother leaves voice mails twice a day, knowing he won’t answer, but promising in a heart-shredding torch that “Lions and Tigers and Bears” could not keep her away. But Hall is still in the thrall, and the punning reaches new heights in a seduction scene where the female ensemble, dressed in red skimpies, attempt to tangle him in a tango. “Aye Papi” is an intoxicating, sexually charged experience almost as titillating as actual hanky panky. Aye Papi, come lay with us indeed!

Male strippers, scantily clad seductresses … Todrick Hall sure knows how to get your attention. And then he knows just what to do with it! Just like Dorothy discovers the Wizard is a fake, Hall shows how the mirage of fame begins to falter. Prejudice, greed and false promises are revealed as the weapons that destroy who we really are. “All I had to do to succeed” says Hall “was silence” honest self-expression, as represented by the Wicked Witch, also played by Hall, of course. Gravely defiant, she sings about marching with fists in the air, “I’ll be silent the day I see mofo monkeys fly! What? Oh. They flying now?” No matter, nothing is gonna shut her up. “My beautiful green brothers and sisters, they tried to kill our pride. We will fight for justice. We will fight for equality. And if the Wizard wants to stop us, he’s going to have to take me down!” It’s creepy, and takes a sickly disturbing turn when cops appear on the stage with squirt guns and – ahem – water her down.

But now it’s not just a wicked witch we are watching die. Just as Elphaba becomes a sympathetic symbol of the downtrodden in Wicked, Hall’s witch stands in for all the “other” people: black, gay, whatever – in his world we are all “green.” And as Hall is squirted to death, the screen above the stage fills with images and words. “Remember Trayvon.” “We Are Orlando,” and the names of dozens of other shooting victims. Astonishingly, a shooting only twelve hours earlier, and only a a few miles away, was included in the montage.

This work of art is completely in touch with current events and a perfect channel for the currents of emotion flowing so strongly, especially in Florida. The build-up had moved the audience to a disturbing intensity, and I wondered how we as an audience could ever get past this moment, not to mention how we as a society might. But again, the genius of this show remained in full force, and the “audience handlers” skillfully guided the house to our feet, holding each others hands and coming together, as a ballad moved us all to a new feeling of unity. “These ain’t water guns. Please save all our sons and daughters.” The emotions shifted from fear of “the other” to an embrace of all others. “We can fly away on a balloon to another land, or we can make this home and find another plan. Too much blood on these yellow brick streets and history repeats until we can finally hold our brother’s hand.” 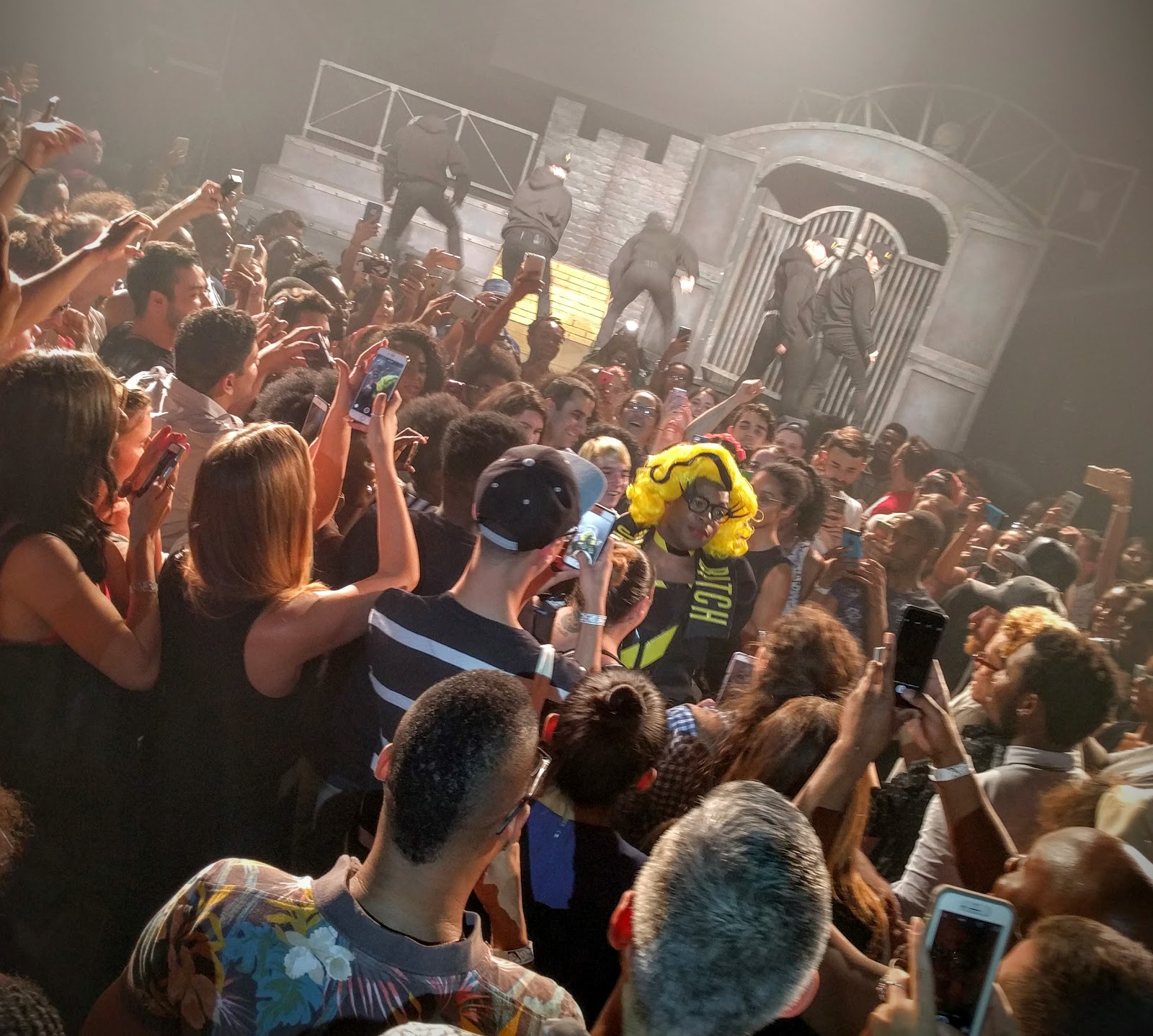 The security that had so upset me at the door now made sense in so many ways. The intimacy with the audience was intense and sincere. A true star of YouTube, social media provides behind-the-scenes access, and real-life interaction between fans and stars. So when Todrick steps into the aisles to hug as many people as he can, singing all the while, it makes sense that his safety had been so carefully assured. Then, of course, there was the entire social message, embodying Black Lives Matter, gay pride, and personal dignity that is the central morality play of this show. Todrick Hall is truly brave to make himself the unrepentant target of haters, and sensitive enough to recognize they are unavoidable. He even has a song for them!

“Click Three: negativity out of my life!” Hall deftly closes the show with the sweet song “Coming Home”, reasserting his true success of self realization and the importance of community. I daresay that message is even stronger in Hall’s version than in MGM’s.
Hall admits to a lifelong love for Oz and sports a full sleeve Oz tattoo. He also has “Made in Oz” tattooed on his neck to affirm his affiliation.

And finally, this review would not be complete without noting how Straight Outta Oz is perhaps the first major iteration of our common liturgy to emerge on the internet. The touring stage show is only part of Todrick Hall’s contribution to Oziana. An hour-long movie on YouTube includes most of the songs and stories. In fact, the audience at the Capitol Theatre was probably more connected to Hall as a YouTube star than they were to the cult of Oz, to which most readers of this article adhere. This was a millennial social event as much as an Oz thing, and that is worth noting. Our community is morphing to embrace new media.

Todrick Hall is both scintillating and gracious as he shares the spotlight with Joseph Gordon-Levitt, Perez Hilton, Nicole Scherzinger, Amber Riley, Jordin Sparks and YouTube-famous Willam Belli, Alaska [Expletive Deleted] and Chester Lockhart. In addition to an “enhanced” cast, the video format allows for special effects, editing techniques and other surprises, making Straight Outta Oz a spectacular, unique work of social art. The video is almost (but not) the same as the live show. After all, Todrick Hall isn’t just a star on screen and stage; he is also a real person who comes down into the audience to share hugs.

Hall apparently needed some hugs, too. After missing out on the role of Scarecrow in The Wiz, he wrote this show as his own solace. “I lost my MTV show, and struggled with the relationship with my mother. Dealing with racism and homophobia … and self image was such a struggle. The Wonderful Wizard of Oz has always held a special place in my heart, and I have never been more proud of anything I’ve created.”

Sadly, the touring show wrapped on September 9, so you will have to see it online. Before he was cast as the new Lola in Kinky Boots there had been talk of taking Straight Outta Oz to Broadway. In an interview in Playbill, Hall said he was open to the idea, but “I don’t want to go to Broadway and do another Wizard of Oz show that doesn’t bring anything new to the community. I want it to be a show that changes people’s lives.” I do believe Mr. Hall may have crafted just such a work of art.

Dewey Davis-Thompson is a playwright, West Florida Representative of the Dramatists Guild of America, and judge for the Theatre Tampa Bay Awards. FMI: Davis-Thompson.com 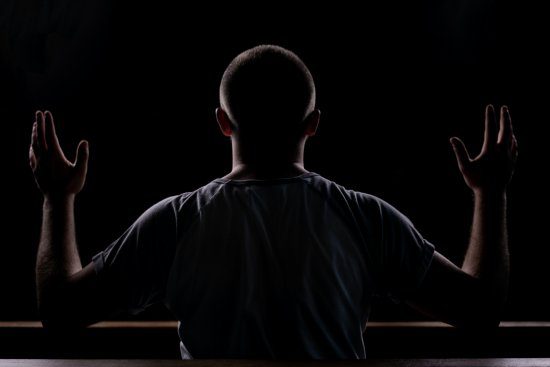 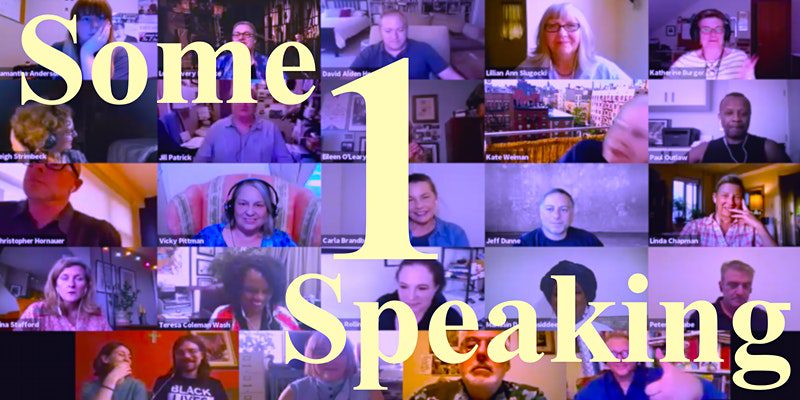 Hear Me on Hear Me Out! 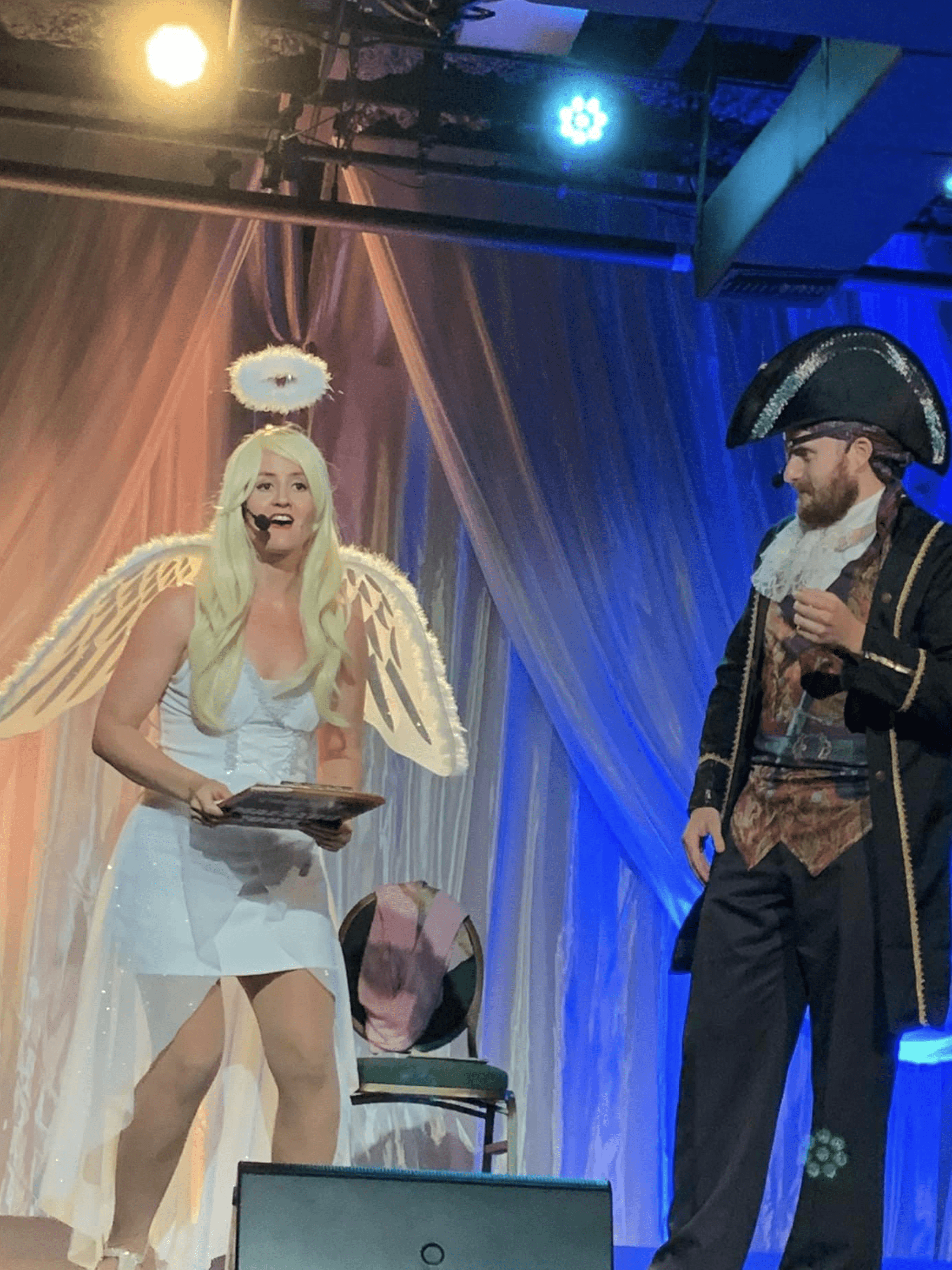 Get in on the next thing!